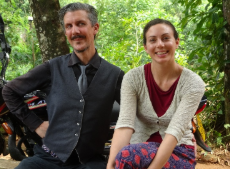 My partner Jenny and I made a decision to change paths. We were determined to embrace change and take intermittent breaks from our chosen careers, an array of furloughs as such. One night as we sat together in our flat in Spain, we fortuitously discovered Tea Leaf Vision. From the very beginning we were inspired by Yas and Tim's story, it seemed both righteous and compassionate. After a delightful interview with Carol the TLV Volunteer Coordinator, we were even more convinced that TLV was the volunteer project that we truly wanted to be part of.

By the end of the month we got the confirmation that we had been selected to volunteer. Filled with glee, we vowed to give all we could to the project. Coincidentally it was at this time, that Jenny and I were to marry. We decided that instead of people giving us gifts of cash that rather they should sponsor our Tea Pick with TLV. Arriving in Maskeliya was a hugely enriching experience, the lush green rolling hills, the smiles on everyone's faces the tangible sense of hope.

At the first Monday morning assembly we got to know all the teachers, interns and students. We could immediately tell that everyone was driven by passion and resilience. This became contagious. In the end, we spent a mere three weeks at TLV in Maskeliya, yet it will stay with us for a lifetime. The positive effects that TLV has on the local and wider community is both admirable and essential. I would encourage anyone who believes in people's inherent power to overcome difficult situations and strive to better themselves, to spend at least a few weeks at this unique Sri Lankan sanctuary.

Back to the Volunteer Blog

DONATE
CONTACT
VOLUNTEER
FUNDRAISE
We use cookies on our website to give you the most relevant experience by remembering your preferences and repeat visits. By clicking “Accept All”, you consent to the use of ALL the cookies. However, you may visit "Cookie Settings" to provide a controlled consent.
Cookie SettingsAccept All
Manage consent

This website uses cookies to improve your experience while you navigate through the website. Out of these, the cookies that are categorized as necessary are stored on your browser as they are essential for the working of basic functionalities of the website. We also use third-party cookies that help us analyze and understand how you use this website. These cookies will be stored in your browser only with your consent. You also have the option to opt-out of these cookies. But opting out of some of these cookies may affect your browsing experience.
Necessary Always Enabled
Necessary cookies are absolutely essential for the website to function properly. These cookies ensure basic functionalities and security features of the website, anonymously.
Functional
Functional cookies help to perform certain functionalities like sharing the content of the website on social media platforms, collect feedbacks, and other third-party features.
Performance
Performance cookies are used to understand and analyze the key performance indexes of the website which helps in delivering a better user experience for the visitors.
Analytics
Analytical cookies are used to understand how visitors interact with the website. These cookies help provide information on metrics the number of visitors, bounce rate, traffic source, etc.
Advertisement
Advertisement cookies are used to provide visitors with relevant ads and marketing campaigns. These cookies track visitors across websites and collect information to provide customized ads.
Others
Other uncategorized cookies are those that are being analyzed and have not been classified into a category as yet.
SAVE & ACCEPT
Powered by